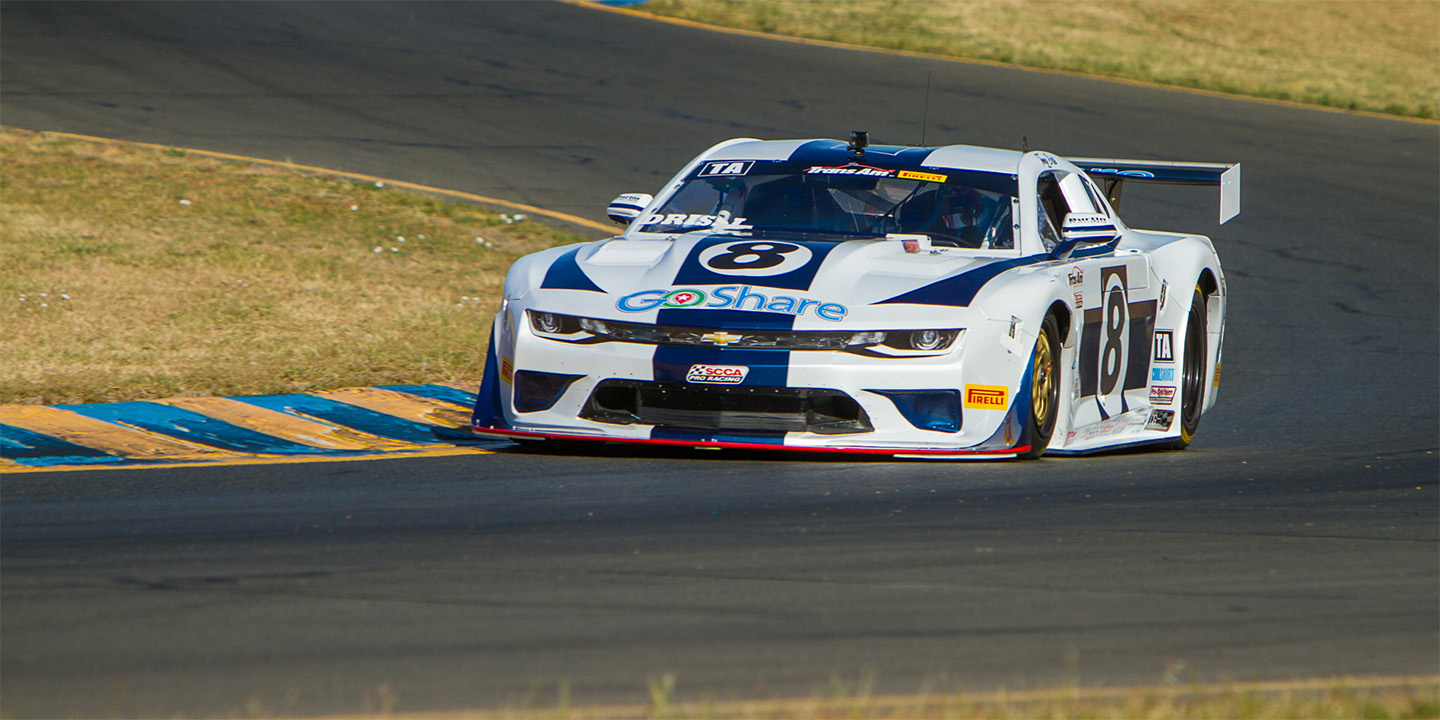 Portland, OR – July 24, 2018 – Tomy Drissi will be aiming to cement his position at the top of the 2018 Trans Am by Pirelli West Coast Championship leader board when the series rolls into Portland this weekend, July 27-29. Round 4 of the Championship arrives in Oregon with Drissi as the leading driver in the series following a gutsy win at the last event at Indianapolis Motor Speedway.

Driving the notably fast No. 8 Burtin Racing GoShare Axalta Chevrolet Camaro, Drissi produced an outstanding performance in Indiana both to win the West Coast championship race and place third in the simultaneous National Championship race for the Trigon Trophy. A repeat performance will likely see him triumph this weekend at an event where the West Coast Trans Am race will almost certainly be the fastest action on the track in a weekend billed as The Portland Vintage Racing Festival.

This weekend’s venue, Portland International Raceway (PIR) is part of the Delta Park complex on the former site of Vanport, just south of the Columbia River. The circuit offers a challenging, 12-turn, 1.967 mile track and Portland International hosted the Trans-Am Series, the premier series of the Sports Car Club of America for the first time in 1975. Sunday’s race will consist of 51 laps of the circuit, an aggregate of just over 100 miles.

It’s a circuit that’s very familiar to Tomy Drissi and is one where he has won before. The Hollywood, California native pilot has competed many times at Portland, including his 2009 win in the famous Rose Cup race – behind the wheel of a Jaguar – a win that Drissi took on to win the Trans Am Championship that year.

“This is really exciting that we are headed to one of the greatest race tracks in America to race Portland Trans Am,” stated Tomy Drissi, driver of the No. 8 GoShare Axalta Chevrolet Camaro. “We are continuing to improve with the team, the new driver chemistry is coming along well with everyone at Burtin Racing. I have had some great battles with Paul Gentilozzi and Tommy Kendall is the past and it’s always a great track to race, looking forward to it this weekend!”

From his position behind the wheel of the No. 8 GoShare Axalta Chevrolet Camaro, Drissi confirmed he is thrilled to be driving the very pacey Chevrolet, and he definitely brings a powerful impact to the track. “To be in that Camaro. I mean, Wow! I’m just over the moon about it!”

Two testing sessions for the race are scheduled for Friday, July 27. Practice sessions are also set for Saturday, July 28 in the morning with qualifying the same afternoon. The race itself scheduled for 11:05 am. Sunday, July 29.

Live timings and results can be found at http://gotransam.com. Keep up to date with all the news from the Burtin Racing team at http://www.burtinracing.com. Tomy Drissi and Drissi Motorsports are athttp://tomydrissi.com.