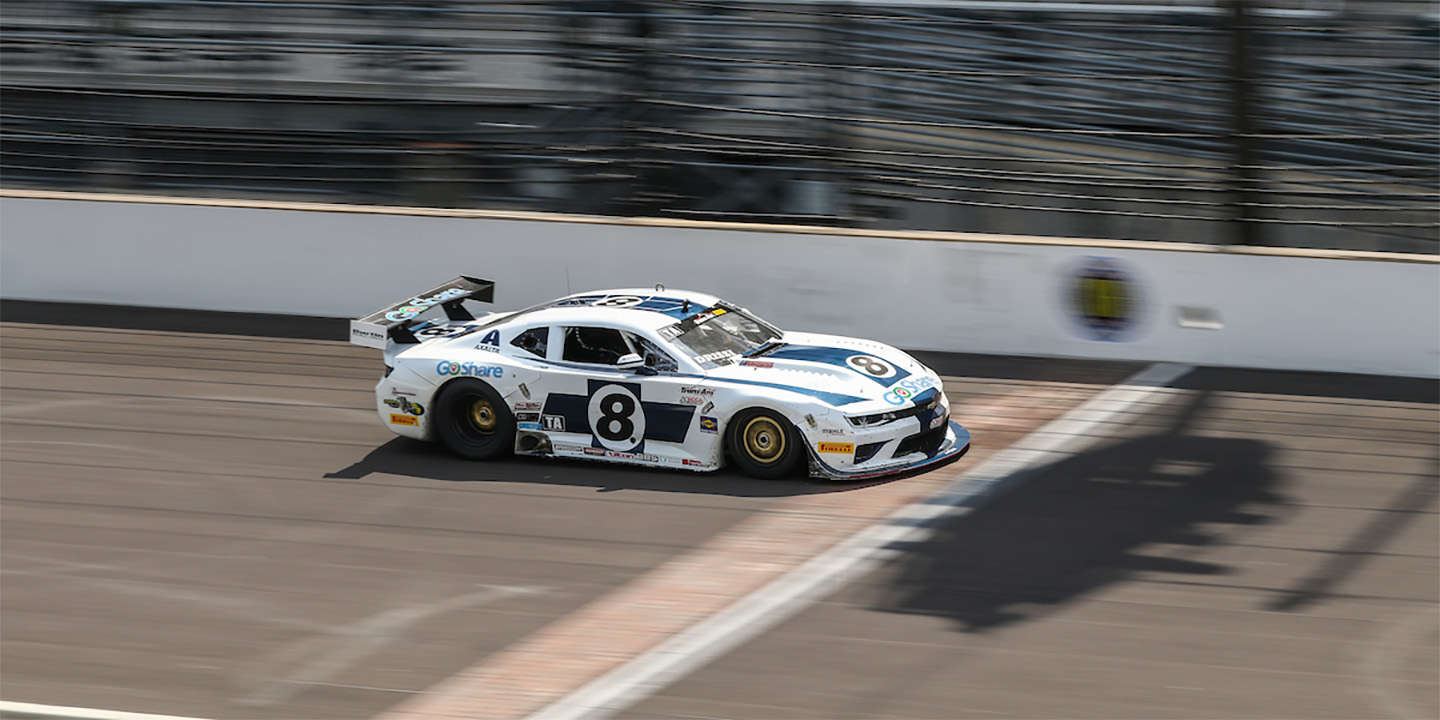 INDIANAPOLIS, IN – June 19, 2018 – A thrilling race at the legendary Indianapolis Motor Speedway on Sunday, June 17, in sweltering heat produced an array of Trans Am racing action as the lead changed hands several times before Tomy Drissi emerged as the clear-cut winner of the West Coast Championship race, while he also finished third on the podium in the overall and performed a stellar race drive. His Burtin Racing teammate Lawrence Loshak was speedy quick and posted the fastest lap of the day of 1.27.996 en route to the overall lead before mechanical issues prevented him pressing home the advantage.

The forecast had been for possible thunderstorms but in the end an uncomfortably hot midsummer’s day in the Midwest greeted the fans and competitors for Round 4 of the 2018 Trans Am presented by Pirelli and the chase for the Trigon Trophy with the racing on track also encompassing Round 3 of the West Coast Trans Am Championship. After a fiercely competitive qualifying session Saturday afternoon, the two Burtin Racing cars were well placed on the grid. Lawrence Loshak qualified the No. 2 Pennzoil/ETE/GoShare Chevrolet Camaro in fourth place, just .147 off from pole position. Right behind him in starting fifth and first in the West Coast grid was the No. 8 GoShare Chevrolet Camaro of Tomy Drissi.

The multi-class 102.26-mile race around the 2.43-mile combined circuit began in exceptionally hot conditions, a sweltering 144-degree track temperatures, making for very sticky and humid conditions. No one handled the extreme heat better than Lawrence Loshak who improved his starting position to third on the first lap. Hard pressing and a charge to the front was going well for the Milwaukee born pilot who used his sharp skills to take the lead. Loshak was pulling away from the pack just as the race was reaching the halfway point when a mechanical misfortune forced him off track unexpectedly. The Pennzoil ETE Camaro had suffered a loss of all forward drive and was unable to complete the race.

Tomy Drissi in the No. 8 GoShare Camaro showed steady early pace to hold fifth spot before climbing to second with nine laps remaining. A harsh drive-through penalty for an incident going through Turn 1 set the driver back in the standings but was able to keep on the same lap. The 2009 Trans Am champion used all his experience to pick his way through the field, securing third place with a superb move to overtake Simon Gregg on the last lap. A focused drive and team effort resulted in a third-place podium finish in the overall classification – a placing which was enough to land him the spoils as race winner in the West Coast Championship race, held concurrently.

After the race, Drissi was quick to praise the Burtin Racing team for their dedication and hard work, “Thank you so much to Burtin Racing. They work so hard and are true professionals.”

Now leading the West Coast Championship, having scored additional points for securing pole in the West Coast race in Indy, Drissi also had words for the exceptional weather, “The real competitor we felt this weekend was Mother Nature. I’m pretty good in the heat, and I feel like it affected the cars and the drivers. We had contact with David Pintaric, which wasn’t intentional – David’s a good guy and I’ll race with him any day. I got black flagged and came in, then got to work in fifth position and caught the third-place finish. I enjoy working with Loshak as a teammate and it’s hard to see the fastest guy not win. Amy and Ernie are great drivers, a P1 in the West Coast and a P3 in Trans Am— I’ll take it!”

After catching up with Lawrence Loshak after the race, he shared his comments,”What can I say, I’m proud to be on the Burtin Racing, GoShare team. The guys have given me a car that I feel so comfortable in and I get to be me. It feels like we’ve been together for decades. The conditions this weekend were very hard on the cars, teams and drivers. We’re fast, no question. We just need the racing gods to award us some luck. This weekend was a heartbreaker for sure, so close to kissing the bricks, but I’m still overjoyed for Tomy and the entire team for getting the No. 8 on the podium. I’m really looking forward to Pittsburg and putting the No. 2 on the top step, where it belongs.”

The Trans Am racing coverage this weekend will be showcased in a CBS Sports Network broadcast on July 1 at 2:00 PM ET. Replays of both race’s live streams can be also viewed online over at Motor Trend On Demand.

Burtin Racing will head to Portland next for Round 4 of the 2018 Trans Am West Coast Championship presented by Pirelli the weekend of July 27 to 29.