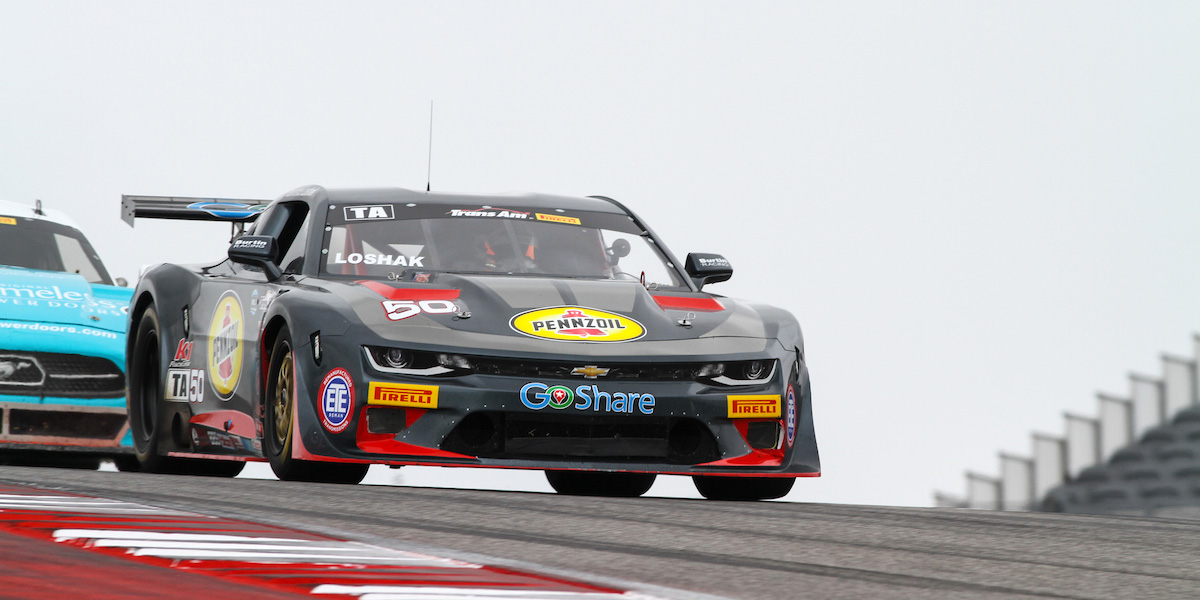 Austin, TX – November 7, 2017 – In his first drive in the prestigious TA Class, Lawrence Loshak in the No. 50 Pennzoil/GoShare Burtin Racing Chevrolet Camaro came just short of a win in Round 12 of the Trans Am Series presented by Pirelli at The Circuit of The Americas in Austin, Texas this weekend. Only a pass by Championship leader Ernie Francis Jr. on the final lap prevented Loshak from claiming top spot in his rookie drive at the top TA class. Second place on the podium nevertheless represented an outstanding achievement by Loshak, who demonstrated his competitiveness in this most demanding of formats and gave Burtin Racing another tremendous result in what is turning out to be a very good season for the Atlanta based outfit.

A graduate from the TA2 class, Loshak’s weekend began strong with second place in practice. The sheer speed of the No. 50 Pennziol/GoShare Carmaro was a testament both to Loshak’s abilities as a pilot and to the tremendous hard work the Burtin Racing team have put in all season to improving the to what is now one of the fastest cars on the grid. Loshak was consistently quick all weekend, posting a best time of 2:10;123 in qualifying to secure a front row start for the feature 100-mile event. The race itself had to be restarted twice but once it settled down, Loshak, always up with the pace, was out in front. For the final nine laps, Loshak led the chase ahead of Francis until finally succumbing on the last lap.

The result builds on progress and performance gains of Burtin Racing’s Trans Am program efforts. This second-place finish at COTA represents the team’s third podium finish of the year. Claudio Burtin reflected on the weekend, “Lawrence did a great job from start to finish. He fit in really well and the car was fast all weekend. From the first session we had a competitive setup which lead to another podium for the team. A week ago, we didn’t know if we were going to be at COTA, we are very pleased to come out of it with a podium finish!”

For his part, Loshak reflected on an outstanding debut and commented on the result, “Incredible car, incredible team, incredible weekend! The Pennzoil, GoShare.co, ETE REMAN, Axalta Chevrolet Camaro prepared by Burtin Racing was absolutely amazing to drive. We’re ecstatic with the results on our very first race working together. It was an unbelievable race with Ernie Francis Jr. and all the drivers in TA and the The Trans Am Series presented by Pirelli. Should be awesome on TV!”

Trans Am presented by Pirelli finishes up for the season with Round 13 at Daytona International Speedway next weekend, November 11th. Claudio Burtin will be back in the No. 7 GoShare Corvette C7.R for the finale TA race of the year.