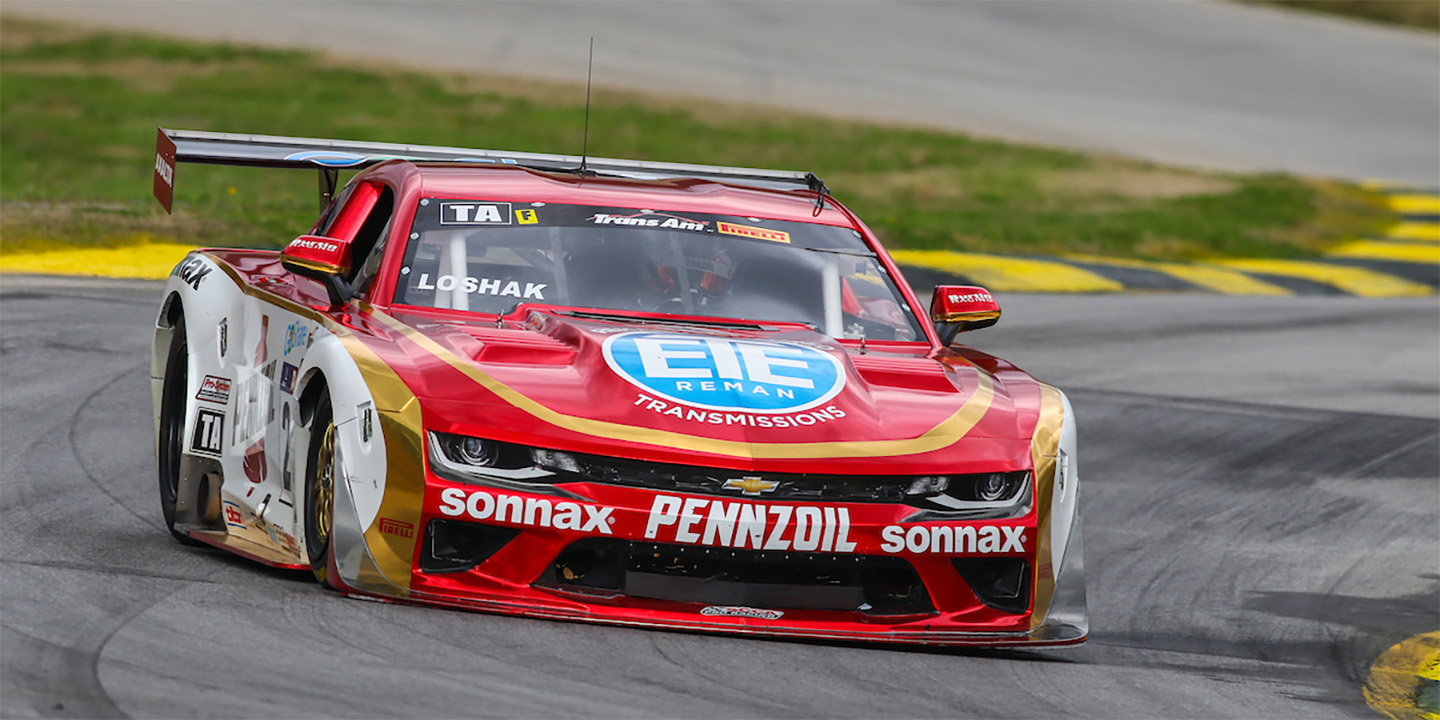 ATLANTA, Ga. – April 3, 2018 – A warm and sunny Easter weekend made for great Trans Am Series presented by Pirelli racing weather at Road Atlanta, nestled in the Braselton, Georgia countryside. The event was staged for Round 2 of the Championships and paired alongside with SVRA and International GT.

First off the trailer and onto the track, Loshak in the Burtin Racing Pennzoil ETE-Reman GoShare Chevrolet Camaro was noticeably quick and topped the charts in the first two practice sessions of the weekend. A mishap though during qualifications, on entry down the hill in Turn 12, resulted in heavy contact with the wall barrier and extensive repairs were underway through the night. The Burtin Racing team worked incredibly hard and their efforts were rewarded when the car appeared on the track Saturday morning looking in fantastic shape.

Starting from the back of the grid, once the race was underway, the No. 2 Pennzoil ETE GoShare Camaro began picking the way quickly and carefully through the field and was rewarded with the fastest lap on the track during the race. However, as can so often be the case when a car has had to be quickly rebuilt, an unforeseen issue with the fuel cell meant the race came to a premature end. Loshak pulled off-track in Turn 3 while keeping the car safely on the pavement.

“Sometimes what happens with hard impacts [is] different things will show up later in sessions,” stated Claudio Burtin, team owner. “You can’t predict what an impact of that type has fractured or has impacted to the point that somewhere down the line it’s going to fail. Lawrence in the race did a great job. He worked his way up through the field carefully and effectively just to be let down by one of those gremlins from the day’s prior impact. We will regroup, go back to the shop, repair everything, we will change every stressed component that we think is in question – put new parts on and be 110% ready for Homestead.”

Loshak sums up Road Atlanta with post-race comments, “Our weekend at Road Atlanta is one I definitely won’t forget. So many ups and down. Fast right off the trailer and P1 in both the Thursday practice sessions, we were off to a great start. And then in Qualifying on Friday, I experienced the scariest crash of my carrier in turn 12. When the car was brought back to our trailer on the wrecker, we were heartbroken. We stayed up all night putting our beloved Pennzoil ETE Reman Sonnax GoShare Chevrolet Camaro back together. I think everyone was surprised to see us ready to race the next morning, especially looking so good! We had perfect race strategy and it was working. Starting last, in 10 laps, we got within 6 seconds of the leaders and then the car shut off. A devastating result after everyone put in such an effort. But we are all proud of our accomplishments and the speed we have on track. And now even more hungry for our first win. I’m really looking forward to Homestead.”

The 2018 Trans Am Series presented by Pirelli continues the weekend of April 13 – 15 with the South Florida Sportscar Challenge at Homestead, FL for Round 3 of the Championships.

Follow all the news and team photo galleries at www.burtinracing.com.