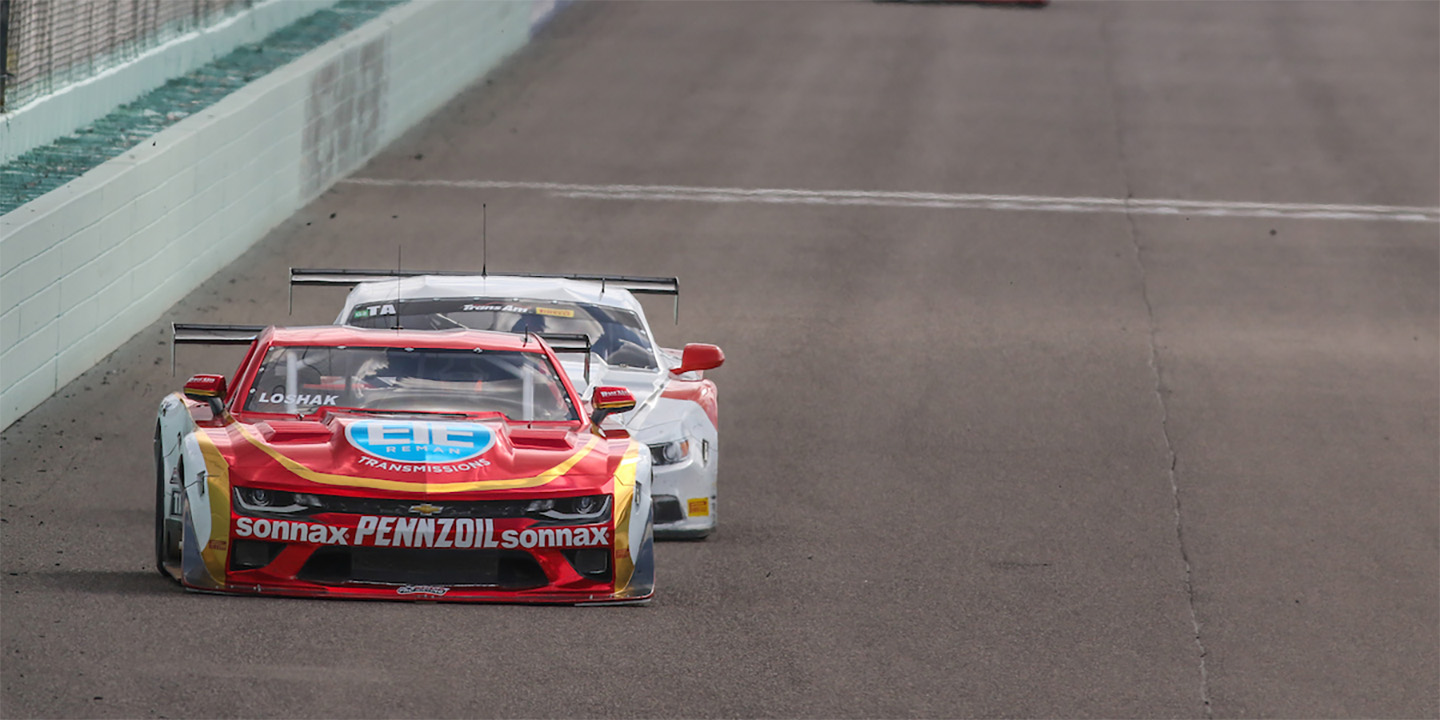 MIAMI, Florida – April 17, 2018 – An enthralling race for Round 3 of the season with the Trans Am Series presented by Pirelli saw Lawrence Loshak match his previous best TA class result with Burtin Racing by finding his way to the podium with a hard fought second place finish in Sunday’s feature race.

A typical humid and sticky April weekend greeted the South Florida Sportscar Challenge, held annually at Miami’s local track, the Homestead Miami Speedway. The action on the track began well for Loshak in the No. 2 Pennzoil/ETE/GoShare Chevrolet Camaro with the Wisconsin pilot maintaining the fast pace he had shown at the two previous events this season, as he negotiated the tight turns and high banking of the Homestead Speedway to be fastest in both early practice sessions. His good form continued into qualifying as he steered the Burtin Racing prepared car to an outstanding outside pole starting position.

The 45-lap race got underway Sunday morning with Loshak settled in second place. After a yellow flag on lap 25 Lawrence had his hands full with a hard charging Chris Dyson and RJ Lopez on the restart, but fortune was in his favor. Chris Dyson, in the Ford Mustang, had worked his way up to second position, but on the 28th lap a hard racing incident with the Chevrolet Corvette of RJ Lopez, caused Dyson to spin. Officials black flagged Lopez for avoidable contact and ordered a drive-through penalty, which was served.

Loshak took full advantage of the incident to reclaim second place and hold off a determined past Champion No. 23 Amy Ruman all the way to the checkered flag.
After the race Loshak was positive about the result when he said, ”Ecstatic to be back on the podium! And to stand on the podium between two Trans Am champions makes that more special. It was a tough race regarding tire management and I stuck to our strategy and it worked. I am glad I did – the last dozen laps the car was a handful in braking zones, accelerating out of Turn 5 and the hairpin. So proud of the Burtin Racing team and forever thankful for my crew. We’re looking forward to carrying the momentum to Indy in June.”

“A superb result this weekend in Homestead, Lawrence did an exceptional job driving the car and didn’t make a mistake. ,” stated Claudio Burtin, team owner at Burtin Racing. “We have almost two months off until our next event with Loshak and development will continue at the highest level. We will have Tomy Drissi and Lawrence Loshak racing as teammates at Indy and we are looking forward to it.”

Loshak’s first podium of the season moves him up to fourth place in the competition for the season Championship, the Trigon Trophy just four points behind David Pintaric, currently in third place.
The Trans Am Series National Championship will return to action with Loshak and the No. 2 Pennzoil/ETE/GoShare Chevrolet Camaro at Indianapolis Motor Speedway on June 15-17.
Fans can keep up with the race events and all of Burtin Racing’s adventures at www.burtinracing.com, on Facebook, Instagram and @Burtin_Racing on Twitter.