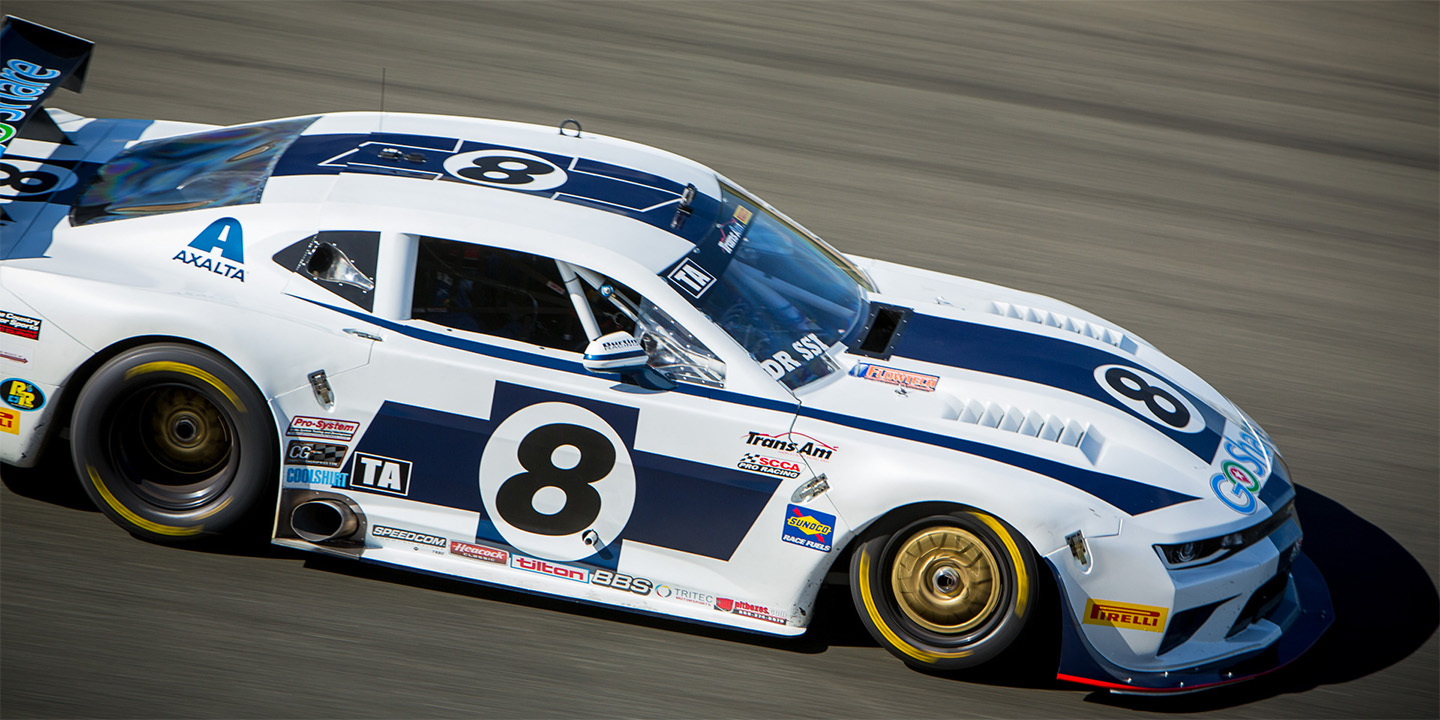 Sonoma, CA – June 5, 2018 – A large crowd gathered at Sonoma Raceway in the scenic wine country this weekend where the Historic Motorsports Festival hosted an action-packed program of modern and vintage auto racing. The highlight event of the weekend was Trans Am presented by Pirelli and the West Coast Round 2 of the 2018 championship.

Having won three races in the series in 2017, expectations were high that Tomy Drissi would add to his tally of West Coast victories, this time in the No. 8 Burtin Racing GoShare Axalta Chevrolet Camaro that has proved so rapid this season. The final practice session on Friday heated up the weekend and put Drissi at the top of the speed charts.

Saturday morning brought the qualifications round and the Hollywood native and 2009 Trans Am Championship winner, put up for second place in a classic renewal of the Chevrolet Camaro going head-to-head with the Ford Mustang and a duel against old adversary and friend, TA class competitor Greg Pickett.

When the wheels went up for the race itself at 4:10 p.m. local time on Sunday, Drissi was ready for the battle ahead and settled into an unchallenged second place. Drissi tailgated his rival for the lead all the way, pressing hard to get past the leader at every opportunity, but the experienced Pickett kept the door firmly closed with little room for error.

“We were so close all weekend, but Pickett and his team were just a little better and they were able to carry that through the whole weekend,” exclaimed Tomy Drissi, Burtin Racing driver. “At the end of the race we were right there, and it was an honor to be on the podium with a legend like Greg! He has not lost it one bit and it was great to see his family with him out at the track.”

“Claudio and the team did an awesome job and of course I am disappointed that we didn’t win, especially wanted to deliver that for the crew and the guys on the team. This was a very important win for Pickett and congrats to their team this weekend.”

The flag was green from start to finish at Sonoma making for a clean race and a podium for the second-place finish represents a fine achievement for Drissi in only his second appearance in the No. 8 Burtin Racing GoShare Axalta Camaro.

Burtin Racing will head to the famed Indianapolis Motor Speedway June 15-17 with both Tomy Drissi and Lawrence Loshak for the first duel appearance of the season with the two respective drivers. For more team information and to follow us online, please visit www.burtinracing.com and tomydrissi.com.