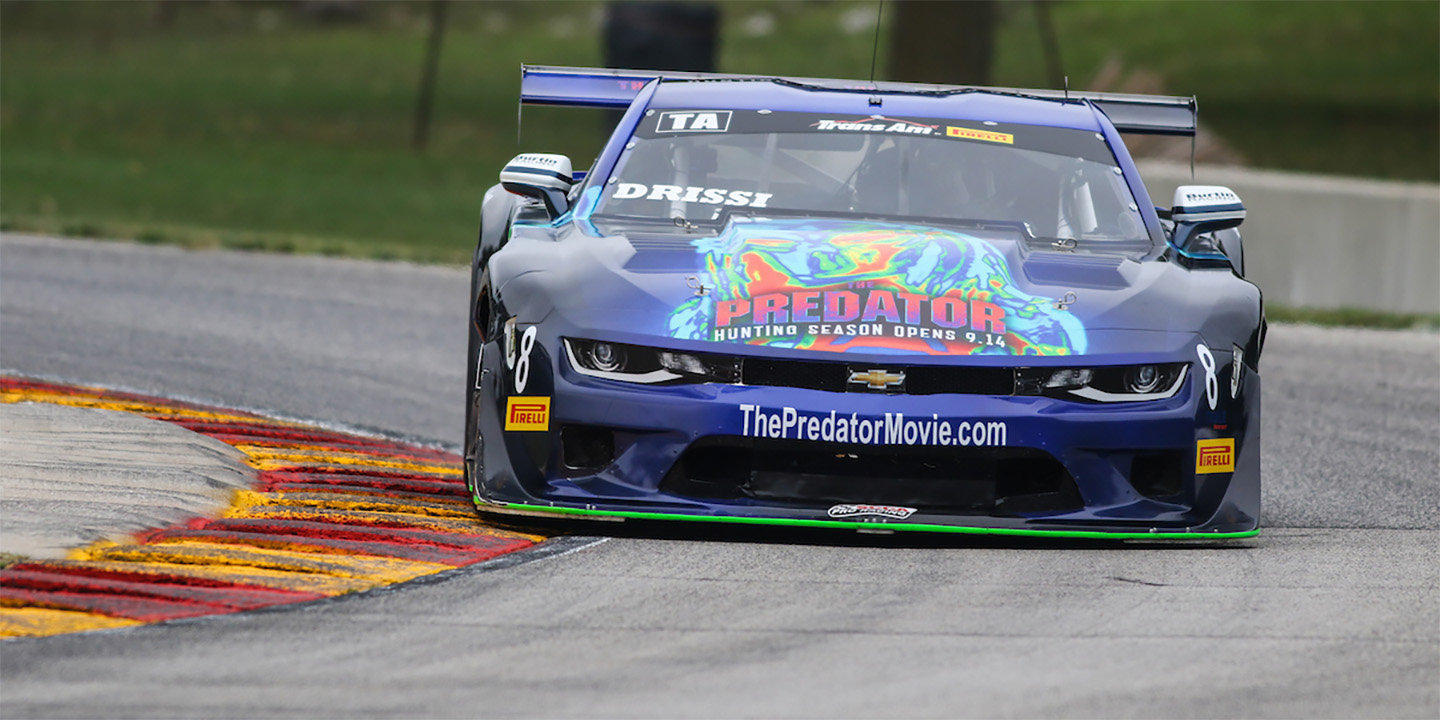 Alton, VA – September 19, 2018 – Burtin Racing will be aiming to follow up their historic 1-2 finish at Watkins Glen International in the last round of the Trans Am Series presented by Pirelli as the team heads to Virginia this weekend for the Heacock Classic Gold Cup. Looking ahead for another strong showing as Round 9 of the 2018 Championship gets underway at Virginia International Raceway this Saturday, Sept 22. The Chevrolet Camaros of Burtin Racing displayed the perfect weekend at The Glen when Tomy Drissi in the No. 8 The Predator Chevrolet Camaro led home his teammate Lawrence Loshak in the No. 2 Pennzoil/ETE/GoShare Camaro for the first perfect score for a team at the track in the TA class since 1995. It was a triumphant weekend for the Alpharetta, Georgia based outfit.

“I haven’t been to this track in a long time – my best finish here is fifth back in 2009. Over the years that I have raced at VIR there have been some good fights and I’ve been close to a podium but haven’t won a race at Virginia, yet. It’s one of the most beautiful tracks – but very daunting for the drivers, the esses are diabolical. I can’t wait to take the Burtin Racing The Predator Camaro through the passes there. Coming off the win at The Glen, we feel we have some pretty good momentum.”

The No. 8 Chevrolet Camaro of Tomy Drissi will again feature the stunning The Predator movie wrap that has so captured the imagination of everyone who has seen it, while the film itself hit number one at the box office after its opening weekend. Burtin Racing and Tomy Drissi have already scooped the West Coast Trans Am by Pirelli Championship for 2018, the race for the Trigon Trophy – awarded to the driver who has amassed the most points over the course of the season in the national Championship – remains wide open. The runner up spot at The Glen gave way for Lawrence Loshak to close within 28 points of Championship leader Ernie Francis. Very much one of the quickest cars on the grid all season, Loshak will be aiming to close that gap further still in Virginia.

To coincide with Round 9 of the 2018 Trans Am presented by Pirelli Championship, Burtin Racing is hosting a shootout of a different kind, Trans Am participants are invited to a night of skeet shooting and target practice with local Vets and Special Forces – including cigars, BBQ and drinks held at the VIR Range in Alton, Virginia. The event starts Thursday, Sept 20 at 7pm.

In a Breitbart Sunday News interview Tomy Drissi shared his thoughts on the upcoming Burtin Racing hosted event, “I’m really excited to be Racing at Virginia International Raceway. It’s just one of the best race tracks in the country. There’s going to be some veterans and special forces – Deployment Cigars and Racing for Heroes are going to be involved with us. Our Trans Am paddock is really involved in supporting the Vets. We’re really proud to sit down and speak with the people who support and protect us. I’m just a proud driver to be racing with the Burtin Racing….Trans Am is made in America!”

17 cars will be lining up on the grid in the TA class for 31 laps of the 3.27 mile circuit, known by the initials VIR. Located in Alton, Virginia right on the North Carolina border, the track originally opened in 1957 having been created by a group of motorsports enthusiasts using a bulldozer! The track was closed from 1974 prior to its reopening in 2000 by New Yorkers Harvey Siegel and Connie Nyholm.

The weekend’s action on track begins Thursday with two sessions of testing. Official practice for the TA class is slated for Friday morning, with the all-important qualifying session later on Friday afternoon. Grid for the race is at 5:05pm ET Saturday with the green flag start scheduled for 5:35pm ET.

A new face will join Burtin Racing this weekend at Virginia International Raceway. Eric Barron, Toyota off-road driver, will test in the No. 8 Chevrolet Camaro on Thursday, Sept 20 in the Trans Am scheduled sessions. Barron competes in the Lucas Oil Offroad Series with a Toyota Tundra in the Pro4 class – including multiple wins and a series best third place in the 2015 Championship.

“Looking forward to test the TA car with the Burtin racing team this Thursday at VIR,” stated Eric Barron, Burtin Racing test pilot. “I was around these TA cars a lot when my brother raced IndyCar with Toyota. They used to follow some of the IndyCar races – I always would make sure to watch them race and really enjoyed the performance ability with the big power, big tires and throw the in the 850hp V8 sound. My race truck (Tundra) is a bit different in some ways and the same in others, so I’m excited to run some laps. I’m not going to know what to do without mud or dirt around! Thanks Claudio and Team Burtin for the opportunity.”

Burtin Racing’s historic success in The Trans Am Series presented by Pirelli race at Watkins Glen International will feature a recap show on the CBS Sports Network on Sunday, September 23 at 2pm ET.

Keep up to date will all the action from Burtin Racing at www.burtinracing.com. News from Lawrence Loshak is at loshakracing.com and Tomy Drissi’s website is tomydrissi.com.