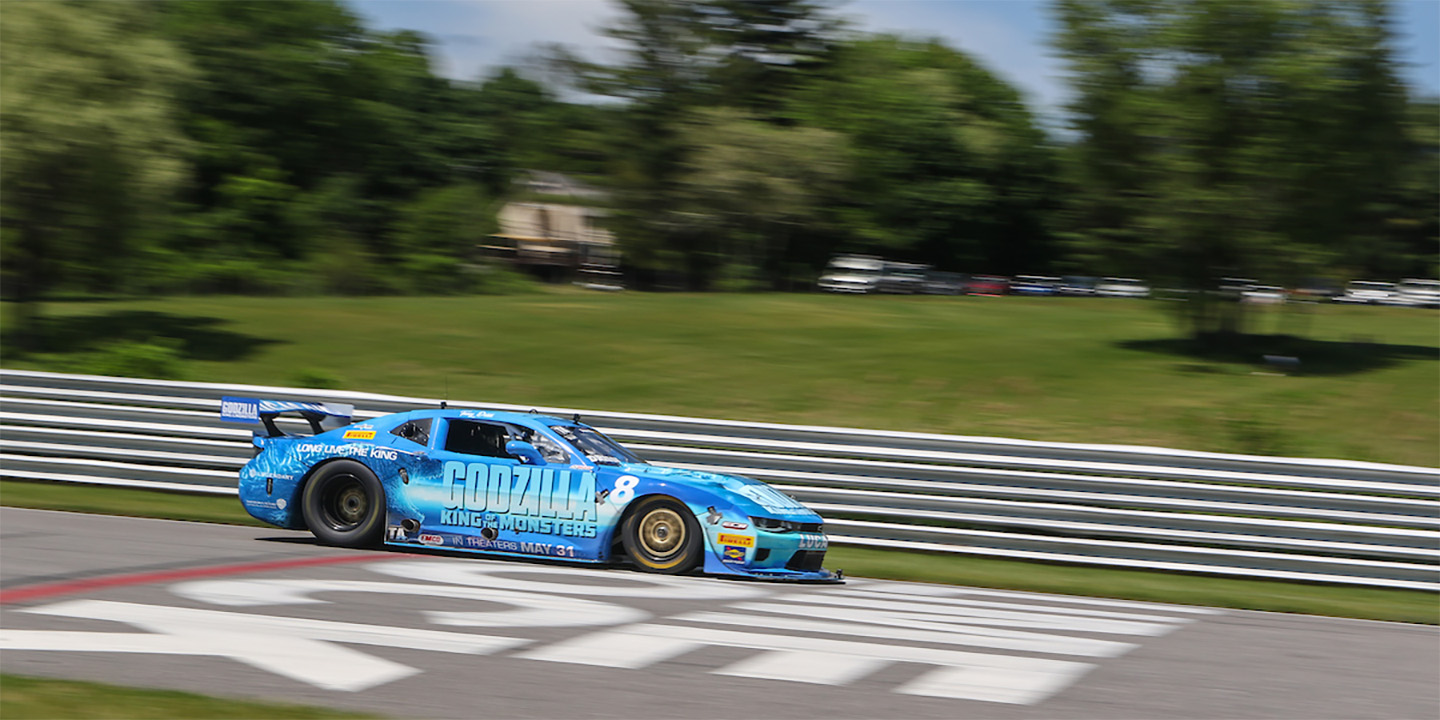 Lakeville, CT – May 28, 2019 – The first four rounds of the 2019 Trans Am presented by Pirelli season have produced three different winners in the prestigious TA Class, but as the series prepares for its midseason break, Burtin Racing remain top of the team Championship table with an impressive 194 points to date. That total was increased by 23 points when Tomy Drissi guided the spectacular No. 8 Godzilla ‘King of the Monsters’ Lucas Oil Chevrolet Camaro into 4th place at the checkered flag on the Memorial Day Classic Monday at Lime Rock Park on Monday.

Going into the weekend, Burtin Racing’s own Lawrence Loshak was leading the driver’s championship standings with a cool 100 points, courtesy of two wins and a podium runners up spot from the opening three rounds of the series. However, the Milwaukee native Loshak was unable to take up his seat at Lime Rock, leaving 2009 Trans Am Champion Champion Tomy Drissi to fly the flag for Burtin. Drissi, dubbed ‘The Rockin’ Moroccan’ by motorsports fans as a nod to his family heritage, was himself lying in second place on 71 points ahead of the New England showdown.

The weekend’s action was the first official TA Series race at Lime Rock since 2015, and in testing on Saturday morning, Drissi put down an impressive 24 laps, the most of any driver in the TA class. He notched the fastest time of the session in 51:431, but when the 850 BHP Trans Am cars got back on the track later on Saturday afternoon for official practice, championship rivals Chris Dyson (CD Racing) and Ernie Francis (Breathless Racing) had found speed to lay down, leaving Drissi in fourth place overall.

There is no racing at Lime Rock on Sundays, so fans had to wait until Monday morning for the resumption of the action on the track. The grid for the all important qualifying session for the TA Class was at 8:50 a.m. on Monday morning and when the cars got out on the track, it was a similar story to the practice session with Chris Dyson on pole and Tomy Drissi in the second row for the afternoon’s race after a best time of 50.835.

In a largely uneventful race that got underway at 1:25 p.m. Monday afternoon, Dyson led from start to finish to score his first win of the year in extraordinary circumstances. The former Le Mans driver had been in a wreck in the Hoosier 100 only a few days previously and required medical clearance to race at Lime Rock. Tomy Drissi’s Burtin Racing Chevrolet Camaro was one of four cars that cleared right away from the chasing pack as the race progressed, but the three drivers in front of him all held their ground and Burtin Racing’s driver Drissi crossed the line with fourth place.

Speaking after the race, Burtin Racing team principal Claudio Burtin reflected on what has been an excellent season so far while acknowledging the battle that lies ahead, “All the cars were really quick here this weekend at Lime Rock. We always know to bring our best and the competition will be stacked in TA. When the competition gets stronger it gets better. The team has a bit of time here to prep for Indy and we are already focusing on our next events ahead!”

Trans Am now takes its traditional mid summer break and resumes at the iconic Indianapolis Motor Speedway the weekend of August 1-4 where Burtin Racing will be looking to strengthen their grip on the season’s championship.

Keep up to date will all the action from Burtin Racing at www.burtinracing.com and Tomy Drissi at tomydrissi.com. Stay up to the minute on happenings from the race weekend but following along @Burtin_Racing on Twitter, @BurtinRacing on Instagram and Facebook and YouTube.