Early Finish for Peterson and Burtin Racing at Mid-Ohio 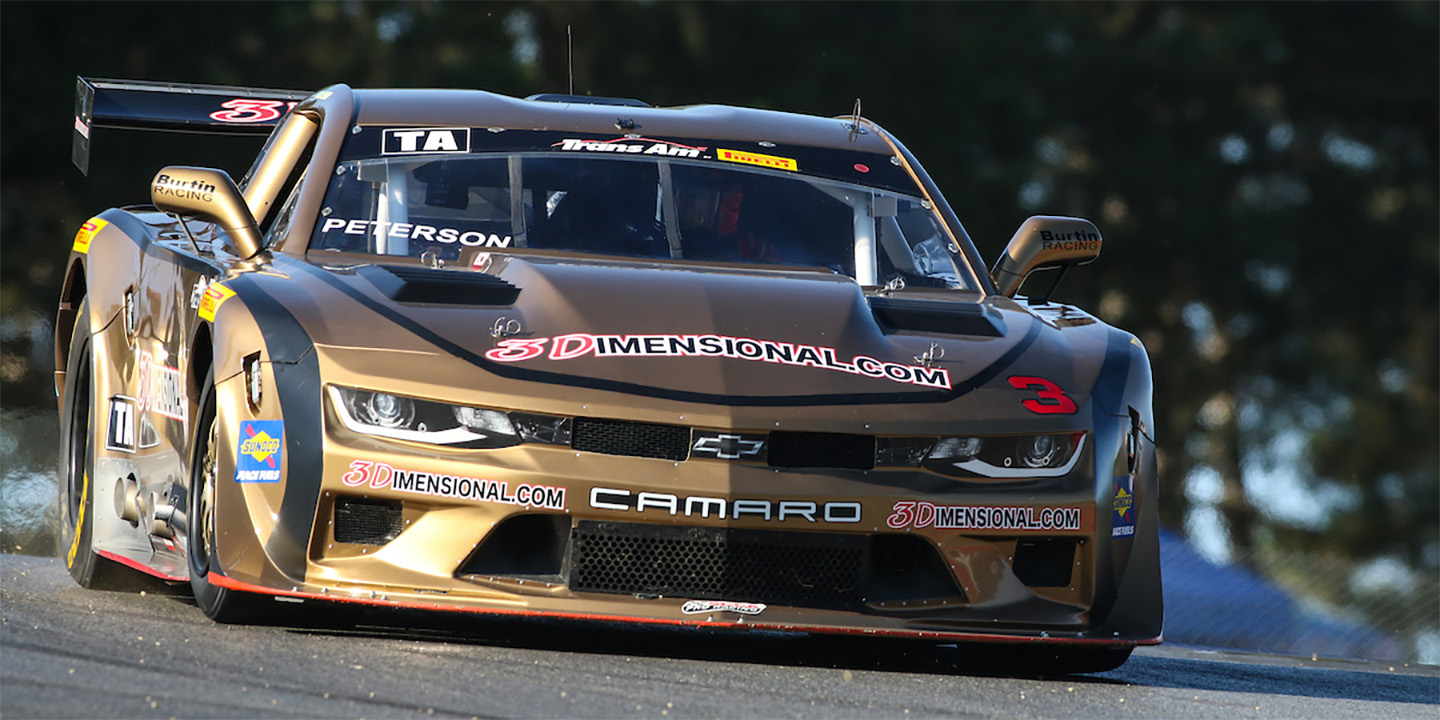 Lexington, OH – August 12, 2019 – A hugely promising weekend ended early for the Burtin Racing team when guest driver and two-time Trans Am Champion Doug Peterson was forced to retire on lap 9 of the feature race on Saturday morning with a mechanical problem. Nevertheless Round 6 of the 2019 Trans Am presented by Pirelli Championship at the Mid-Ohio Sports Car Course again illustrated the competitiveness of Alpharetta, GA. based Burtin Racing Chevrolet Camaro as the season heads towards its climax.

Peterson took the hot seat in the No. 3 3-Dimensional Services Chevrolet Camaro at very short notice after the temporary withdrawal from racing last week of Tomy ‘The Rockin’ Moroccan’ Drissi due to a calf injury. Tomy is keen to be back to defend his win of 2018 at Watkins Glen and the sheer pace of the ECR Engine powered Burtin Racing car straight-out of the box at Mid-Ohio demonstrated this competitiveness. The early on track action saw Peterson notch a 1:27:094 on the time cards for second place behind Chris Dyson.

Peterson’s pace continued all the way through the testing and practice sessions to qualifying on Friday afternoon where he clocked 1:22:577 for third place on the grid, a position he held when the race got underway Saturday morning. Vastly experienced in Trans Am, Peterson is the type of driver who likes to conserve the resources of his car for a hard charge in the final third of the race, but mechanical failure robbed Peterson of the chance this time after he had made the tactical decision to allow Adam Andretti to pass him.

Doug summed up his weekend after the race when he stated, “The weekend started off great. I enjoyed driving the No. 3 Camaro. The team is really good. We made a lot of adjustments to the car to get it to where I could be really comfortable with driving it. At the start of the race I was doing fine. I was very happy to be charging in third place. I wanted to save the tires and the brakes as I really didn’t know how much degradation they would take. The car was doing just fine. I was waiting for the rear tires to warm up but then I got a light on the dash and by the time I got to the carousel I had some sort of failure and just coasted the car in – but it was fun. The team is awesome.”

Burtin Racing team principal Claudio Burtin intoned a similar theme and paid tribute to Doug when he said after the race, “It was a real pleasure and an honor to work with Doug this weekend at Mid-Ohio. We’ve been friends from the race track for many years. He was immediately on the pace and getting faster as he got to know the car and the weekend progressed. Unfortunately, we had a little off into China Beach which might have had something to do with what finally took us out of the race. Overall I’m satisfied that we had a competitive car immediately out of the box for Doug. While it’s not the result we wanted I think he was happy with the team and the performance. It’s just one of those racing things that caught us. I look upon it as a learning experience. Every time we come to the track if you don’t learn something then time is wasted.”

Claudio added that Burtin Racing will definitely be at Road America later in August when Trans Am resumes for Round 7 of the Championship so watch this space.

Keep up to date with all the action from Burtin Racing at www.burtinracing.com and Tomy Drissi at tomydrissi.com. Stay up to the minute on happenings from the race weekend buy following along @Burtin_Racing on Twitter, @BurtinRacing on Instagram and Facebook and YouTube.